For the first time that I can remember, Eagle Mountain city has gone an entire calendar year without an embarrassing scandal in city government. We have had challenges no doubt, but no scandals that have embarrassed us, humiliated us, or tarnished our reputation during the past year! Halleluiah!

The Eagle Mountain City Council inked the contract earlier this month, according to spokeswoman Linda Peterson.

The concert, dubbed "A Salute to Our… Continue


I saw this help wanted ad in the upcoming City newsletter.

Being in the Genealogy and Family History line of work, I recognize the… Continue

One of the common topics of discussion of the past couple of weeks has been snow plowing in Eagle Mountain.

We have had the most snow that I can remember from a single storm in a dozen years. Even the "Valentine's Express" snow strorm from last year didn't drop as much snow as the ones we have had this December. Click here for a link to the blog post about the 2008 Valentines Express snow… Continue

I got a phone call from Brandon Waters, Eagle Mountain's radio celebrity, asking where the cardboard, phone book, and paper recycling bin had been moved to. It used to be in the North Service Area (Ranches) fire station parking lot. Brandon wanted to take some items to be recycled, but noticed the bin had been moved.

I didn't know the answer to where it was so I offered to call Mayor Jackson to find out.

One of the other sites that I operate is a social networking site for people that are interested in discussing the 2012 presidential election. The site is President2012.ning.com. I also have this site set up at POTUS2012.info.

While it is illegal to bet on U.S. elections in the United States, the rest of the world is fascinated with U.S. Elections and don't have any qualms about… Continue

This is part of an inside joke, but it is funny enough. The guy's at BlendTec found a great way to market their product. They are marketing… Continue

To steal a phrase from the infamous Tom Grover. Some people get it, some don’t. Eagle Mtn. council member David Lifferth “get’s it.”

Over the past three years, www.DavidLifferth.com, owned by City Councilman David Lifferth, has drawn nearly 300,000 page views from 84 countries by tracking all things Eagle Mountain.

Eagle Mountain had one of its largest snow storms that I can remember in the last 13 years. It snowed almost all day long and KSL radio reported 14 inches in Eagle Mountain. It only snowed a couple of inches where I was in Salt Lake.

My family and I walked up the street to take present to a neighbor. I was impressed with the beauty of the snow and Christmas lights and decorations. It reminded me of "Whoville" in the Grinch movie. It was so… Continue

National Journal:Up To 13 Seats Could Be Reapportioned In 2010

Up To 13 Seats Could Be Reapportioned In 2010
New Census Estimates Show South And West Gaining At The Expense Of Northeast And Midwest; Texas In Line For Biggest Increase

Newly released Census Bureau population estimates show that as many as 13 House seats may shift across the country following the official 2010 Census, according to an analysis by the Washington-based Election Data Services.

Blog: Playing in the snow at the Silver Lake Ampatheater 12/20/08

I took my kids to play in the snow at the Silver Lake Ampatheater. It wasn't very crowded and we had fun.… Blog: Weather, Traffic, and other new features on DavidLifferth.com

I have recently added some additional useful features on my web site DavidLifferth.com. These features are easily accessible on the left column of my web site.

After I spent 2 hours and 15 minutes getting home from work, I thought it would be useful to have easy access to the relevant traffic cameras on my site. The traffic cameras include Lehi, Thanksgiving Point, American Fork, Provo I-15 at Center Street, as well as key points along I-15 in Salt Lake City. There are 3 cameras from… Continue

DesNews: Silver Lake homeowners in Eagle Mountain may want to take over HOA

EAGLE MOUNTAIN — Residents of Silver Lake Village, a private subdivision on the northeast side of town, may want to take over the defunct homeowners association after they say the rules have not been enforced under the developer.

Abandoned cars and unsightly conditions prevail in the… Continue

Dial 511 for Travel Information from UDOT 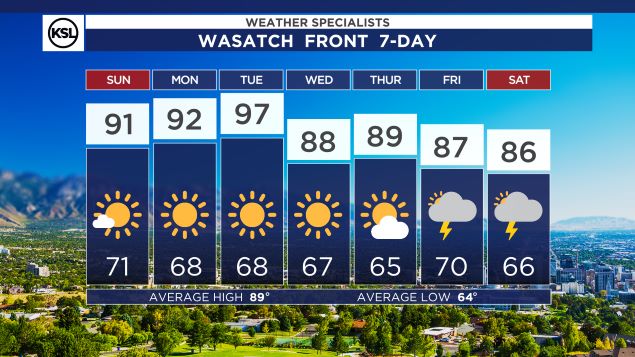 The Utah Transit Authority's board of trustees on Wednesday adopted a $280.1 million budget for the year beginning Jan. 1 — an amount that was only $1.7 million more than the previous year.

Sales taxes, UTA's primary source of revenue, have been down because of the recession. Sales-tax revenues in 2008 were 18 percent less… Continue

Now as economic development director for the city, the 6-foot-3-inch Pili challenged… Continue

The two new high schools opening up next year in Utah County — Maple Mountain on the border of Mapleton and Spanish Fork, and Westlake in Saratoga Springs — are both stocking up on coaches.

At Maple Mountain, principal John Penrod has about three-fourths of his staff in place. Spanish Fork track coach Dave Boyack will be the Golden Eagles' athletic director.… Continue Each year Eagle Mountain City hosts a Christmas party for city staff and elected officials. This years entertainment was a Karoke with several of our home grown talents including Dave the Fireman, Nate Ochsenhirt, and Steve Mumford.

I have to say the entertainment pretty good, or at least better than I expected.

Dave the Fireman (named similarly to Joe the Plumber) did a couple of Elvis songs with an Elvis wig on. He then did an 80's tune with… Continue

EAGLE MOUNTAIN, Utah (ABC 4 News) - The building battle continues over Silver Lake Village in Eagle Mountain on Thursday. The building developer is now back and demanding money from the people living there.

The subdivison was left high and dry by the developer, Steve Jones, a few months ago. They were left… Continue